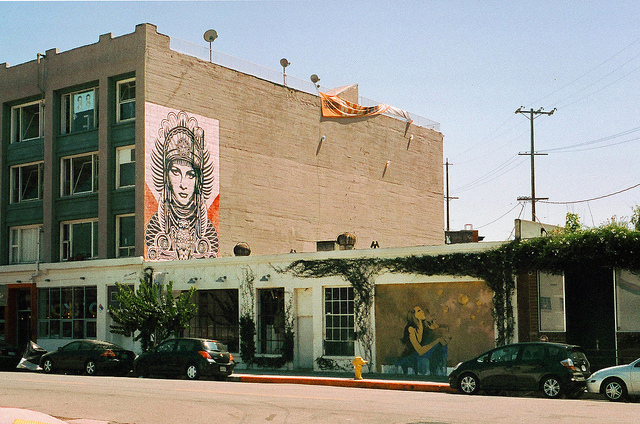 The Downtown Los Angeles Arts District emerged in the late 1970’s as a neighborhood where artists, musicians and other creative individuals could find cheap space in the abandoned warehouses and industrial buildings of Los Angeles’ original warehouse district.

The warehouses of the late 1800’s and early 1900’s were concentrated in the area near the Santa Fe rail facilities located between Santa Fe Avenue and the LA River.  The Atchison Topeka and Santa Fe railroad established the yards and, later, the first grand-scale terminal on land that had been obtained from the city in exchange for building levees to better control frequent flooding of the notoriously meandering river.  The warehouses all had spurs connecting to the yards in order to facilitate rail shipping in the era before modern roadways and trucks. Remnants of the spurs are visible along side a number of the neighboring buildings today.

Near the turn of the last century the vineyards established by Jean-Louis Vignes gave way to orchards that were subsequently replaced by the growing warehousing and manufacturing operations.  After the Second World War, the emphasis on building highways and related infrastructure under the Eisenhower administration caused warehousing operations to establish truck-oriented facilities several blocks South.  Manufacturing continued in the district but suffered a slow erosion as more plants, both large and small, moved to car and truck friendly locales. As traffic and parking became issues with the demise of the Pacific Electric Red Car system and the simultaneous suburban boom, the entire downtown area became increasingly marginalized.  The lack of a viable modern infrastructure led many building owners to walk away or mothball their buildings rather than build newer facilities in the immediate area.

The Artist influx grew in the 1970’s and 1980’s as Venice and Pasadena became untenable for those needing cheap space.  By the punk era, the Arts District was home to the relocated Atomic Cafe and Al’s Bar among other shorter-lived venues for music, art and poetry.

The 90’s economic downturn saw an increase in crime that prompted neighbors led by convenience store owner Joel Bloom and others to improve the neighborhood as a place to both live and work.  By the late 1990’s the Adaptive Reuse Ordinance came into effect and the city was allowing variances from the industrial zoning originally implemented to eliminate residential usees, to build new ground-up residences in addition to the reuse projects.